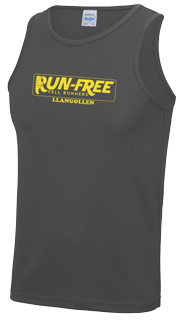 Established in October 2017, Run Free Fell Runners is a comparatively new club set up by Warren Renkel, a passionate fell runner who moved to Wales in 2016.

After thinking about deciding which of the clubs to join after resigning from his road running club in Cheshire he pondered on the idea of setting up a new local club. One of the reasons being that after spending 6 - 12 months getting to know the local hills he realised what a fantastic place Llangollen is to run. The hills and trails encompass three separate valleys and are fantastic running.

So in October 2017 a group of us did the first run from Llangollen.... From there we now have 80+ members, growing rapidly and competing in local events.

Our Club Colours are Grey and Yellow and all our kit is supplied by Vinyl Bear based in LLandegla.

Run Free Fell Runners also has a club championships with between 10 - 12 races a year where we compete against each other internally in divisions. We then have a prize giving at the end of the year alongside our other club awards.

A summary of the advice issued to fell runners by the WFRA is recreated below. For the full WFRA safety advice sheet please view the Race Organisers Handbook on the home page of www.wfra.org.uk.